The Wonders of Miniature DIY

For those of you who are not familiar with the word “miniature”, it refers to everything and anything that’s been built to be a tinier version of the original object. One of the earliest miniature artefacts ever found went as far back as the third century.  It was a miniature portrait of a man engraved onto a piece of glass. In the modern DIY and hobbies communities, the number of miniature enthusiasts continue to grow as more and more people become interested in the craft.

All of us at Cape Watch being such dedicated hobbyists, are of course big fans of miniature building. It gives us a sense of control in the otherwise chaotic world around us. Just imagine for a minute that the world is exactly how you want it to be. There is nothing out of place and all the buildings are designed according to your taste. When you build your own miniature model, this this is exactly what you get. From a hobbyist’s point of view, here are some examples of our favourite miniature projects:

This is a fun trend that became increasingly popular this year on social media. We start with a set of tiny kitchen utensils including pots and pans, stove and oven, as well as small pieces of ingredients. Enthusiasts would then make a video of them using the utensils to make actual edible food, albeit in the miniature sizes. The recipes range from sweet treats like donuts, pancakes and crepes, to burgers, sandwiches and steaks. These videos have gone absolutely viral and are attracting millions of views.

Scale models of aircrafts and automobiles have always been a favourite amongst hobbyists. They have a special place in the hobby community and has been a long standing tradition that many hobbyists love. It has become so popular that some of these models have been mass produced as model sets that amateur model builders can construct at home. There are of course fanatics that build from scratch. Some of the favourite options include sports cars, military aircrafts, and aircraft carriers.

Like the car scale models, vintage war figurines also have a special place in the hearts of hobbyists. It brings back a sense of nostalgia from the days before children had high tech gadgets to play with. In our grandparents’ generation, these figurines were probably among some of the favourite toys that kids played with. Even to this day, there are fans that use them to re-enact famous battles and wars.

To end the list of our favourite miniature projects, we have chosen the miniature box houses. This of course is not only limited to houses, but can also include miniature factories, offices, schools, shopping complexes just to name a few. Incidentally, for all you miniature enthusiasts, the Cape Town Miniature Fair is coming up in September. Some of Cape Town’s most talented hobbyists will be displaying their miniature box house projects to the public. It’s definitely worth a visit.

Aside from being a fun hobby, construction of miniature items can become an actual career path. This is due to the fact that model building has a wide range of commercial uses across different industries. These include:

One of the biggest and most practical uses for miniatures is probably to display building designs. Property developers often work with architects as well as professional modellers to construct a scale model of the development. These can include residential complexes on a small scale, as well as models for large shopping malls or commercial districts. This allows the purchaser to have a clear idea of what they will be purchasing before construction even breaks ground.

If interior decorators wanted to showcase their designs, their best bet is probably to pitch their ideas to a graphic designer. However, a computer generated image can never live up to the visual advantage of physically seeing the design. Therefore, many decorators often display their favourite decor themes in a miniature box house.

Among the miniature enthusiast, there are those who do not build their own, but rather purchase completed projects from others to put into a collection. There is a large market for these collectors’ items, and the prices can be very handsome.

Designing and constructing your own miniatures require a great deal of patience and out-of-the-box thinking. Sometimes it may be hard to find such small parts for your projects. This is when you will need to think creatively. When we built a box house as a part of team building, we utilised spare  watch parts for the grandfather clock, a piece that definitely highlighted the entire project. Another idea we came up with is painting watch glasses  with semi-transparent paint. We used this to recreate stained glass.

It is without a doubt that any DIY hobby project will be difficult in the beginning. However, making miniature objects are extra difficult, due to the sheer tininess of your end product. Here are some tips to help you along: 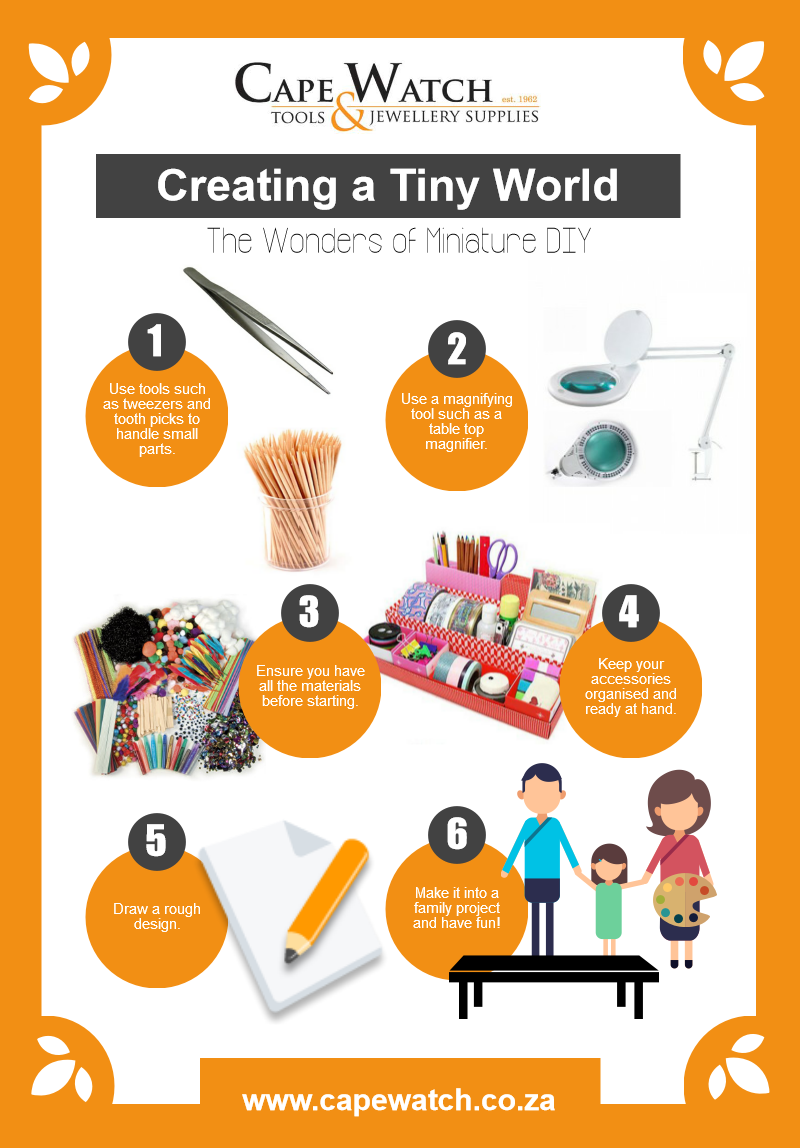 Products
From the Blog